Objective
to practice the alphabet

This game as a bit if prep, but if made and laminated the cards can be used for a number of games in the future. The game plays like the classic card game WAR (may be known by other names).

Prep:
Print and laminate (I recommend having a colored backing to limit cheating) a deck of alphabet cards for each pair of students. I use a deck consisting of each letter 2x

Game:
In pairs, students divide up the cards randomly. I use a deck of 32 cards (each letter 2x) so each student should have 26 cards. Have the cards face down on their desk.
At the same time, both students flip the top card over and say the letter on their own card.
The student with the higher letter (A is highest, Z is lowest) takes both cards. If it is a draw, both students flip another card until there is a winner.
Play until time is finished, or until one student looses all their cards. Winner has the most cards at the end.

Ill usually have a poster or the alphabet written on the board for students to reference at first - eventually they should be able to do it without the board reference. 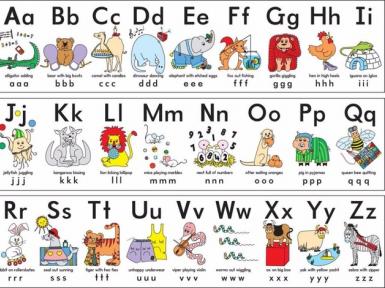