Objective
To teach/review Christmas words. To get students more familiar with English letters and words.

This is an activity to make Christmas words with alphabet cards.

Make 8 teams (lunch groups) and get the students to turn their desks to face each other. Give each team a set of laminated alphabet cards (see attachment) and make them spread the letters across the tables.

Call out a simple Christmas word that doesn't use the same letter twice.  Students need to work together to spell the word with their letters. As soon as you've called the word, start counting down from 5. When you get to zero, yell "stop". All of the students have to put their hands on their heads immediately. If the group has the word correctly spelled then they get one point. Play several times and the team with the most points at then end wins.

The following words don't have any repeated letters:

You could write all the words on the blackboard.

Before this activity I used the same words in a game of BINGO. I told the students that the sheet was a "hint."

This game did not work so well as a race as groups would finish at about the same time. 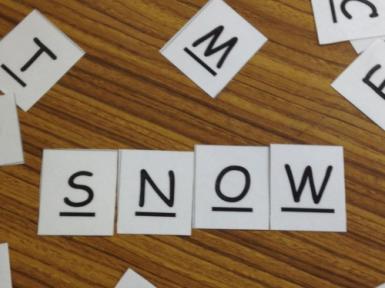