Objective
Students ask directions to landmarks in a race to complete their maps.

This is a variation of a worksheet I found on Englipedia.

Students are divided into groups of 3, and each group has a variation of a map they must complete. They are given three landmarks on their map, but the rest are blank. The goal is to fill in each blank space with a landmark and to draw a path leading to the closest train station.

Here's the catch: every group's map has different landmarks given, so they need to find out the locations from other groups.

Each student has a role: one is an "explorer", another is a "teacher" and the last is a "cartographer". The "explorer" goes around to each group and asks where certain landmarks are. They bring the memo with them to record their findings. The "teacher" stays and tells other groups' "explorers" where locations are and how to get there (if the group knows them). The cartographer fills in the map after the explorer returns and reports their findings - drawing pictures of the landmarks, labelling them in English, and drawing a path to the nearest train station.

The "explorers" need a "memo" worksheet and a "how can I get there" script (depending on ability - I'd do it for 1st year and lower level 2nd year students).

The "cartographers" need the map. Please stress that they need to protect the map and not let other groups copy it!!!

This activity definitely requires demonstration beforehand. For explanation of the game, have a blank version of the map blown up to A3 or poster size on the board and read the Listening Script. The ALT is the "explorer" and the OTE is the "teacher". Get a student volunteer to be the cartographer. Act out how the game progresses and explain the roles. Practice the script as a class. Get your OTE to provide translations of each role to cut down explanation time.

The first team to finish correctly, and all other groups that get everything correct should be rewarded accordingly.

This activity took about 30-35 minutes in total.

If 3 people is impossible for a group size, then 4 is ok - the 4th person can act as a "scribe" for the explorer and take memos while the explorer speaks and asks about the landmarks. 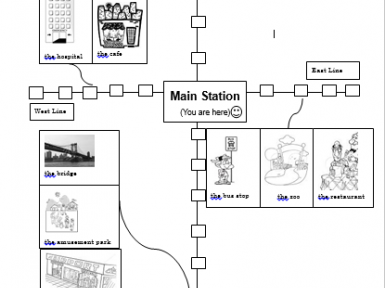