The powerpoint file is too large to upload to the speakraku site, but it can be found using this link (or see the KIIF-friendly link below) to a google drive document. To download it as a powerpoint, just select “download” from the file menu.

The Momotaro lesson in the textbooks is a little…odd. This alternative lesson uses the theme of traditional folktales to introduce the students to two Native American folk tales, one from the Pacific Northwest and one from (current-day) Alaska using picture books. I bought e-book versions of the picture books and then converted them into a powerpoint.

PART ONE: The stories

Use the first 4 slides to introduce the story to the kids—where it’s from, what that place looks like, and some pictures of traditional dress/art/life.

Read through the story once through in English, without translation. The English in the picture books themselves was too complicated for ES students; I wrote a script to tell the story in very simple English, so feel free to tell the story in your own words. The script that I used, and a (very rough and hasty) Japanese translation is in the “notes” section of each slide of the powerpoint.

Then, have the kids tell you what they understood (English or Japanese is okay).

Finally, read through the story once again, this time having the HRT translate each slide after you read it in English.

Do the same thing for the second story.

Have the students form teams of four to ten students (depending on the dynamics of your classroom), each with a set of answer cards (these cards are the last four slides in the ppt). Each answer card has a different character on it (Raven, the grandfather, the old woman, the polar bear). Read the question sentence (“I can fly.”) and have the groups hold up the answer (basically the same format as a maru/batsu quiz). The next slide is a picture that shows the answer. Teams who get it right get one point.

Although usually I try to conduct lessons completely in English, this is one that really benefited from having the HRT explain in Japanese what was going on first.

If your HRT is enthusiastic about it, they could have the children research about Native American culture and art beforehand to prepare for the lesson . The first picture book in particular purposely mimics the shapes and color palate of Native American art in the Pacific NW.

When I suggested this lesson, it began with suggesting that we could compare Momotaro with traditional folk tales from America, and then as we planned it we realized that there was only time to do two stories, not three, and it would flow better without the Momotaro element. A lot of the teachers don’t particularly want to do the Momotaro lesson either, but if they are nervous about straying too far from the textbook, I found it valuable to say that a) senpai ALTs suggested this kind of lesson and had used it successfully in their classrooms and b) one of the goals of English Activities is “international understanding” (国際理解、こくさいりかい）, and so this is a great chance to introduce the students to something from outside of Japan.

Thank you to everyone on the facebook group, especially Suen Rowe, whose discussion of the Momotaro lesson gave me the idea. 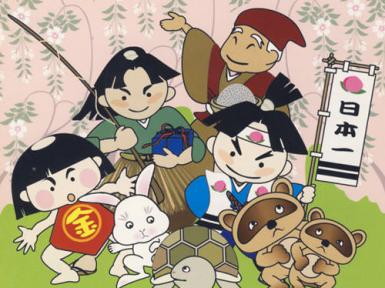