This game is a cross between UNO, memory and typhoon. The main idea is to get ten points with two uno cards. Beware! Preparing this game will cost you a pack of UNO cards. (Content Editor 's note: Unless you make your own. Then it costs you blood, sweat, time, papercuts, and laminate sheets.)

You will need to print out school subjects and Days of the week and attach magnets (as pictured). You will also need to attach magnets on both sides of the UNO cards. Set up the cards in a grid so students can direct you to a particular card by saying something like “I study math on Friday” or “I study English on Monday”.

Get the students into groups. I use two rows per group (4 groups). Students arn’t allowed to write anything down.

Get the first two students in the first group to direct you to two cards. For example, the first student will stand up and say: “I study math on Friday”. The second student will stand up and say: “I study English on Monday”. Turn these cards over. If they add up to 10 (say, 6 and 4) then the group gets to keep them (10 points). If they don’t add up to 10 then give all the students a few seconds to remember the cards are and then turn them back over. Give the next team a go as before (I study ~ on ~ ). It continues like a game of memory. When cards are removed replace them with new cards.

This game works best by showing. I don’t use any wild or skip cards as the game is already pretty complicated.

I used to play this game similar to Connect 4, but the students had to connect three Pokemon to get points. I stopped playing that version of the game as it was flawed and hard to win. 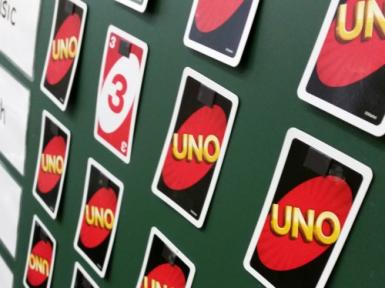